The Karate Day on October 25th, we held a demonstration martial arts organized by the Okinawa Dojo at the headquarters. This year, a large-scale event sponsored by the prefecture was canceled due to the influence of the Corona, so we are planning to hold a commemorative performance contest hosted by our dojo. To prevent corona, only dojo students were allowed to participate, but on the day of the event, online distribution was made on Facebook and Instagram, and many people in Japan and abroad watched it.

In order to promote karate as a traditional culture that promotes not only techniques but also learning at the same time, we held a study group in the first part and held a session to deeply understanding of the history and philosophy of karate centered on the teachings of Matsumura Sokon, who is regarded as the founder of Shurite. The second part, we actually performed Karate and fully demonstrated the results of our daily training!

You can also watched it  on YouTube, so please take a look at it at the following URL. 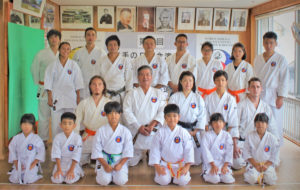 World Oshukai America branch(San Francisco) has been opened since April 2022.